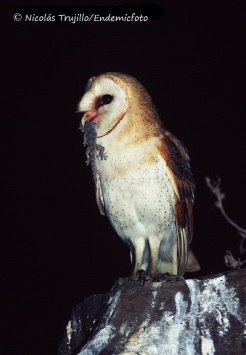 of a barn owl insular population

The barn owl (Tyto alba) is one of the most widespread nocturnal birds of prey around the world and its feeding ecology has been studied extensively. However, a significant amount of this information comes from continental populations, usually associated with human’s activities, whereas knowledge from insular populations, especially from oceanic islands, is very limited or missing.

Of the three endemic subspecies described by Ernest Hartert for Macaronesian arquipelagos, the so-called slender-billed barn owl (T. a. gracilirostris) is exclusive to the eastern Canary Islands. Its breeding habitat on these volcanic islands and islets is dominated by both well conserved environments (slope escarpments in hills, fissures in cliff faces, volcano craters or lava tubes) and environments slightly transformed by human (quarries in volcano hills, road banks, etc.). Excepting those situated in deserted and isolated islets, nesting and roosting sites are always arranged close to potentially foraging areas, usually placed near to rural establishments like small villages, farms or cultivated lands.

On the island of Fuerteventura, where it is likely that it has never been abundant, the barn owl could be affected by the apparent shortage of prey caused by a radical reduction of agriculture, among other land changes, during the last decades. The food habits of this owl have changed from being based on endemic species of reptiles and mammals, including the currently extinct malpaís mouse (Malpaisomys insularis), to introduced rodents such as the house mice (Mus musculus domesticus) and the rats (Rattus spp.).

One of the aims of the present study is to detect variations on the diet of the barn owl in Fuerteventura over time by analyzing a large number of pellets, collected during the last 30 years in different localities. Special attention will be paid on frequency of temporary occurrence and prey size selection of representative taxa, such as the seed-eater passerines, whose populations are declining, or the house mouse. By sure, this analysis will quantitatively describe diet composition of these threatened insular barn owl considered as “Vulnerable” (Canarian list of endangered species), but also will help to understand the within island distribution patterns of elusive or rare prey species, such as the Canarian shrew (Crocidura canariensis) and the Eastern Canary Islands skink (Chalcides simonyi), among others.﻿