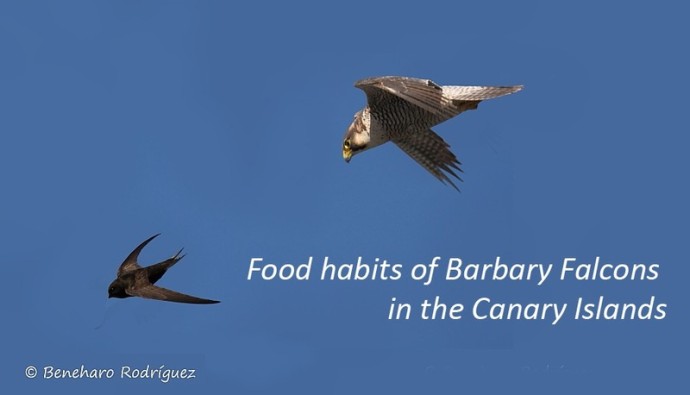 The number of Barbary falcons (Falco [peregrinus] pelegrinoides) in the Canaries has experienced an amazing natural recovery in recent years. From only a few pairs in the early 90’s, basically restricted to the western islands, numbers have increased to nearly 150 well distributed throughout the arquipelago. In spite of that, this falcon is strictly protected, the same as the rest of the Canarian raptors, by regional and national laws.

Nowadays, thanks to various studies, we know certain facts about the breeding biology of the Canarian falcons, however their food habits still haven’t been described in detail on the islands. This information will give us some indication in order to clarify the causes of that spectacular population recovery previously mentioned.

As far as we know, the diet of the Barbary falcon on the islands mainly consist of rock and feral pigeons (Columba livia). If we add the noticeable population increase of both species, it’s not unusual that hunting dives are becoming more frequent and visible, and that domestic pigeons are often their prey. This nearly always clashes with the deep-rooted tradition of pigeon fanciers in an extensive sector of the Canarian society, often provoking a conflict of interests. Such antagonism is one of the reasons why several delinquents kill falcons on the islands every year, either by shooting or by other methods.

In order to study the overall composition of their diet, as well as evaluating the true importance of domestic pigeons, during the last few years (2010-2014) we have systematically collected prey remains of falcons in Lanzarote and Tenerife (box 1). Given that it is impossible to accurately identify the origin of the pigeons consumed if the ringed legs aren’t collected, we will use molecular techniques (stable isotopes) in order to determine the relative contribution of these domestic and feral pigeons. Our results, given the importance of the above-mentioned conflict, will be analyzed, reviewed and published as soon as possible.

Apart from the ethical considerations, all the stages of this work follow the established legal regulations. For the collection of samples and handling we have the corresponding authorization from the Dirección General de Lucha contra el Cambio Climático y Medio Ambiente del Gobierno de Canarias, and in order to circulate using regulated tracks from the Área de Medio Ambiente, Sostenibilidad Territorial y Aguas del Cabildo de Tenerife. The Estación Biológica de Doñana-CSIC and SEO/BirdLife delegation in the Canary Islands are also participating in this study.

Box 1. The offering of prey from male to female during courtship seems to be narrowly linked to the aim of copulating. Beside prey remains, at the bottom of perch and nest sites (A), existing pellets are also collected (B). Its analysis (C) hardly contributes to what the diet really consists of, but it can reveal curious data on very small and unusual prey, as well as on secondary seed dispersal, among others.