Ringing program of Barbary falcon in the Canary Islands 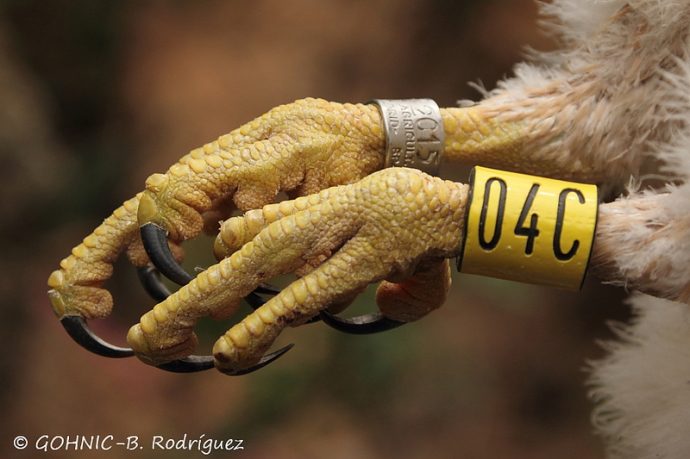 ﻿Bird ringing is a basic tool used to find out about specific aspects on the ecology and biology of the different species which later could be applied to their conservation. The ringed birds, in this case the Barbary falcon (Falco peregrinus pelegrinoides), will provide valuable information on juvenile dispersal, philopatry, survival, mortality, etc., which will help to increase current knowledge that we have on this protected raptor in the Canarian archipelago. The program, authorized by Dirección General de Lucha contra el Cambio Climático y Medio Ambiente del Gobierno de Canarias, has already started in Lanzarote and Tenerife, and will probably be implemented on other islands in the coming years. We are grateful for the invaluable help of Gustavo Tejera (ornithologist from Lanzarote) and, as on previous occasions, the team of professional climbers, Javier Martín-Carbajal and Juan Zamora.

During spring 2014, seven Barbary falcon nestlings, distributed among three nests, two in Tenerife and one in Lanzarote, were banded with metallic rings (right leg) and yellow PVC rings with an alpha-numerical code. Following the some protocol concerning rings and codes, at the beginning of June a fledgling from Teno massif (in the NW of Tenerife), which had been admitted and rehabilitated in CRFS La Tahonilla (Cabildo de Tenerife), was also banded.

We implore ornithologists, birdwatchers and nature photographers to send us data referring to any observations of these ringed falcons. Please send all information (ring code, date, location, photographs if possible, etc.) to Manuel Siverio (msiverio@gohnic.org). Many thanks for your collaboration.